At a job that is in the industry, but isn’t that creative, I met Christia. It was friend love at first sight!

We have the same birthday and the same ideas on spirituality, creativity, positivity and productivity (all the ty words – lol).

Her sweetness is juxtaposed with her silent toughness. She laughs a lot even though her job is challenging. Most people would be happy to have accomplished the work she has. But she isn’t most people. She doesn’t brag and she doesn’t rest on her laurels.

She is also a fire spinner, a dancer, a singer, a producer, a writer and an actress.
She is many more things but I don’t want to make you think she is super human, though I believe she just may be.

This year, we celebrated our birthdays over high tea and she told me that the song she had recorded was finally getting made into a video. She was producing it and gathering her team.

She asked if I wanted to be a part. OF COURSE!

Not sure how I could help, but I wanted to just absorb it all.

I told her I could be as useful or as invisible as she needed me to be.

In May, on the day of the shoot, she picked me up at the crack of dawn, perky and looking fresher than a person who was about to be the producer and the star of a long shoot day would normally be.  Her car was packed in tetris form with craft services (some store bought food and some home made by her) and costumes.

A mutual friend of ours who is in the industry said to me, “you are going to learn so much.” I had worked on sets, both in front of the camera and behind and had even produced a few things, so I was a little taken aback by that comment, but egos are a funny thing.

I wasn’t planning on NOT learning. But I wasn’t in it for the lesson, if you dig.

I won’t get into too many details of the shoot other than Christia brought the energy, the organization, the fun, the creativity and the love to the set. She gathered a top notch team of people. Her make-up artist had created lashes that Lady Gaga had just worn to the Met Gala.

The downtown LA loft space was stunning. My mouth was either agape or smiling.

I put out the food Christia had prepared and was dubbed Crafty since everyone assumed I was the caterer, managing craft services (I wasn’t). But I  did make the coffee strong (no complaints) and I did somehow sense when to shift from breakfast food and then put out the lunch food and then snacks as there wasn’t a clear distinction of a “lunch break.” Maybe I was crafty – ha. Some of the crew, I respected from afar but would never warm to, while a few others, I was instantly drawn to. There was such a level of creative talent, that it was overwhelming in the best way.

There were lots of costume, hair and make up changes. The set and art direction were fantastic!

It was a long shoot day but it ended with Christia taking Shaka and me to dinner and us recollecting all the adventures.

Our mutual friend had been correct. I learned a ton that day! Some lessons were production based. Some were personality based. And some were just knowing how far I have come in my own personal growth as a friend and as a creator. Witnessing how Christia handled this day and her own personal journey was quite rewarding.

Today, her video dropped and I stayed up last night to watch the premiere. I am so excited and proud of her for who she is and what she accomplished and what she will still create. 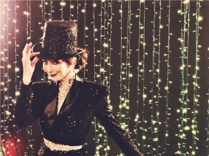