So I admit that I was reading too quickly when I saw that the Hammer Museum was opening an exhibit for Paul McCarthy called Headspace, I misread it. I was like, cool, a Beatle does art. I’ll check it out.

I invited Faye to join me. I had never been to the Hammer before and Faye had yet to visit an LA museum since she moved here. Win-Win. When she asked me what the exhibit was, I actually couldn’t even remember that I had thought it was Paul McCartney. I told her I didn’t know, but that it was an opening and…why not.

Why not, indeed. Whenever Faye and I get together, we have fun.

The weather was clear, the roads weren’t cloggy and anything could happen.

I picked her up and we caught up and chatted about all her current activities. Faye is an actress living her best life here in LA. She and I met doing theater in Portland several moons ago. She is so good that she moved to LA and didn’t need to get a job doing anything else. Her hustle is legit and she works EVERY DAY! So I like hearing about this voice over gig and that audition and this film and that commercial and this awards show and that theater role. Plus, she had just had some friends visiting so I got to hear about how she took them all over LA, like I had once taken her. But with her own spin on it, naturally.

We got to Westwood and started looking for parking. I wasn’t worried. We would find the best space. But we drove around a few times. I got disorientated. But then…voila! Space found. Almost like valet. not really. But not…not really.

She had just gotten the iphone 11 and I, with my phone envy, got very excited over the camera features.

We wandered into various exhibits and sat in crazy swivel chairs that I knew I was going to break or fall out of (I didn’t). 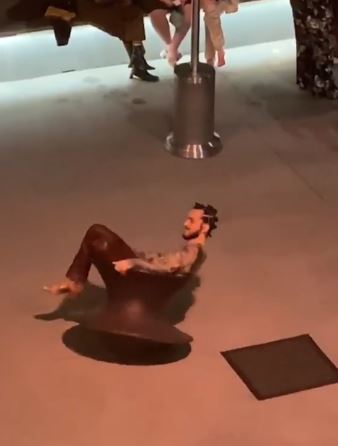 Dude in one of the swivel art chairs

Then we continued chatting as we entered each exhibit. One was really cool where it was photographs deconstructed in a way that looked like salacious parts of the body but in reality was like a knuckle or a belly button.

I kept saying, “that’s a penis. Or a butthole.”

And Faye would point out my mistake. “That’s a belly button.”

“Oh, but that one there is definitely a butthole…and a penis.”

“Uh, wrong again. You seem to be able to see ONLY those two things.”

I laughed. But wondered why my brain was stuck in 8 year old boy mode.

Then we entered the Paul McCarthy exhibit.

I once saw the Basquiat exhibit at MOCA with Mads and I had to leave the room because the energy coming off the canvas was so dark and negative that I couldn’t breathe (sue me, I am dramatic), but in the same museum, I was admiring Warhol’s suicide/death series and was like, “hmmmmm, interesting.” I loved the film about Basquiat, but that exhibit was too intense. I don’t even remember what the paintings were of. So it’s not subject matter, apparently, it’s how it makes me feel.

And McCarthy’s work felt aggressive and like he was working some stuff out of his soul.

And then Faye says, “Well, here’s your penis. And your butthole. And there is another one. You were in the wrong exhibit.” And we laughed as we hightailed it outta there.

We drank some wine. Took in the people-watching. Took snaps with her phone. In fact, she handed it to me and said, go wild! So I did! Love that girl. 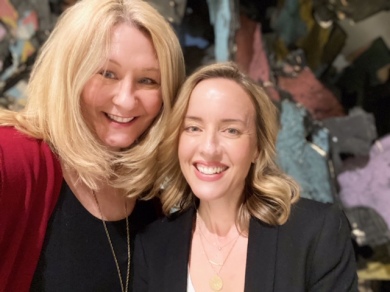 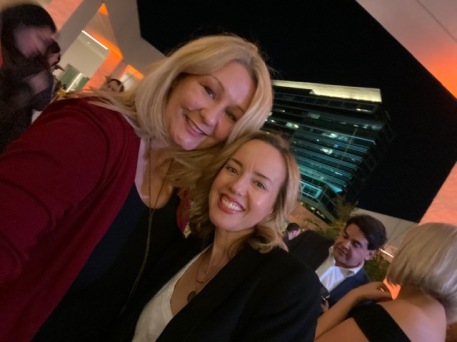 An older gentleman walked up to us and asked us about one of the exhibits (Max Hooper Schneider’s ‘Transfer Station,’ 2019. Mixed media) and we told him it was interesting and to take a look,

Then he said, “Did you check out the big exhibit by McCarthy? Disturbed!”

And it hit me that I sounded like that old man. BLECH!

“Well, it’s art,” I said, “and everyone gets something out of some things,”

What a nonsensical thing to say, but it got me out of the conversation. I mean, I did think it was disturbed, but I was never gonna try and encaspsulate art into something. It’s ART! You don’t have to love it.

We felt the rumble in our bellies and knew the cheese sticks they were passing out weren’t going to do the trick. We left the Hammer and wandered Westwood Village on a Saturday night. How was it possible that everything was closing? It was 9:30!!!! This is a college town! But we ended up at the Napa Valley Grille and as Faye/Poppeacock luck dictates, it was HAPPY HOUR!!!!

Our server was great, the food was delish and the rose was perfect! We played around with various settings on her phone as we finished up. As I went to the restroom, I realized, we were leaving before their posted closed hour, but we were the only people there who didn’t work there. Oops. Time to boogie.

We made our way down Wilshire back to her place. The air was still perfect and roads were still clear.

Getting cultured and shit.