When I was a kid, my biggest goal was to become an actress.

I didn’t do anything about that dream other than performing in elementary school plays and then in high school, auditioned to be ONLOOKER in a few other children’s shows.

Finally, in my mid-twenties, I bit the bullet. I went looking for representation where I was told by my potential agent: “Sometimes, you meet someone and they don’t have a lot of experience. But…they have IT. You just know. My dear…you’re not one of those. You don’t have IT.”

Believe it or not…she ended up becoming my agent after I took her suggestions of things I could do to do in lieu of having IT. I got head shots, took classes and ran into her at a workshop. She was surprised I was better than she expected.

That isn’t to say, I was a good actress. I wasn’t really.

Comedy? Yes. But Drama? Not so much.

I actually was a receptionist at the time and had an audition where I played a receptionist. I didn’t get the part. I got bit parts here and there and did a film where I played a woman who died of frost bite. Made my mom cry cuz the blue lips and ice on my lips in my death scene were too much for her. If you look closely, my eyes are shut and I do look dead…except for when you see my throat swallow.

But one of the best things that came out of my acting time, was a friendship I struck up with a girl in one of my classes. The teacher was very dramatic, go figure. And the class was vibrating with wannabe actors like me, all wide eyed and filled with open intentions. This girl I befriended, Debbie, was a raspy-voiced, blond spark of light! She smoked, drank and talked really fast. Her mind was quick. Her loyalty was fierce and her determination was unrivaled. Debbie and I became a squad with a few others in our class. We were all each other’s biggest fans.

Debbie and I grew closer. I didn’t realize she had an alcohol problem. I wasn’t a big drinker back then. And I had grown up in Venice where many of the feral surfer kids were constantly high. I just assumed they were zen from the ocean waves. And with Debbie, I just attributed a lot of her personality of addiction to being part of her charm. I wasn’t the brightest.  What I did notice about Debbie was that she was talented and met people very easily. She was quicksilver in human form. Her parties were epic. Her friends were all characters. Boring wasn’t part of this world.

Skip skip skip…she moved to California (we were in Oregon at the time) and then back to Oregon after working a variety of jobs from personal assistant to valet.

Then, one snowy December, I got a call from her asking if I could drive her to rehab. I remember that driving was a little difficult due to icy roads.

But we made it.

And so did she.

Soon after, I went to a rehab group meeting with her as well as AA and I even went to Al-Anon.

But her world was shifting to a sober focus. I wasn’t a user but I wasn’t a teetotaler either. I am sure that was hard on our friendship.

Eventually, I moved back to California and she and I drifted apart.

Facebook reunited us. And to my excitement, she not only was still sober, but she had carved out an amazing life. She had gone back to school and become a conservation research scientist and the executive director of the KOTA (Keepers of the Ark) Foundation for Elephants.

Just last month, she released her book, “The Will of Heaven” about her recovery and her journey to be an advocate for elephants. 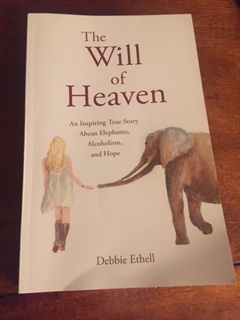 She always had IT! But she also made IT happen when it looked like the cards were stacked against her.

I highly recommend this book. Not just because I know her and am quite proud. But because it’s really good!

I decided somewhere along the way, that my acting career was to be replaced with writing, comedic storytelling and voice work. Shifting like quicksilver looking for its groove.

But because of finally taking the leap to pursue acting, I met some amazing people. I am still in touch with a few. Many no longer act. But all are thriving in various ways.

We may no longer be a squad, but I still always root for them and their accomplishments. And Debbie as the leader of the squad, has my utmost admiration, both for her personal journey and for helping to save the elephants.

Maybe IT is in the eye of the beholder. And like quick silver people, IT shifts when IT finds the right moment in time to find the right fit.

One thought on “Quicksilver People finding IT”