My first round of treatments were coming to an end, and the holidays were also going to be almost over. I decided since we had a couple days free, Shaka and I could take an overnight trip. My co-worker had gone to Sensorio back in October and loved it. I had never been to Paso Robles before and thought what a perfect opportunity. I didn’t realize it was only 3 1/2 hours from LA. Mads hooked us up with a private, members-only wine tasting at Justin Winery. We didn’t have tickets to Sensorio because the online tix were sold out but you could take your chance in line if you showed up. We planned our trip for the day after Christmas.

Christmas Eve was lovely at my relatives’. And Christmas day was festive. Our friend BW has a Christmas day open house every year and she recently moved a few blocks from us which was uber convenient. All her guests are creative people. Writers, producers, art directors, musicians, etc, so the conversations are always lively. Then in the evening, we headed to Shaka’s brother’s for our gathering. I almost had asthma from laughing so hard several times throughout the evening. The rain was pouring down and I wondered how our drive would be the next day.

I didn’t need to worry. The weather was perfect on 12/26. We began our trek to Paso Robles at 9am with all the promise a beginning of a trip has. But just as we were feeling the rush of the road, we noticed what would be the first of many traffic jams.  3 and 1/2 hours, they said. It will be fun and easy, they said. Our appt at JUSTIN was changed a few times as the WAZE lady would neutrally state “estimated time in traffic is 30 minutes” causing me to start crying. The only thing that kept me from a full blown anxiety attack was that the views we were passing were so gorgeous.

6 hours later, we ended up in Paso Robles. JUSTIN is located at the end of a very long, two-lane road. It was very scenic and beautiful! I wondered at one point, if we were even going the right direction since there was no signal out there. But lo and behold…we arrived!!! 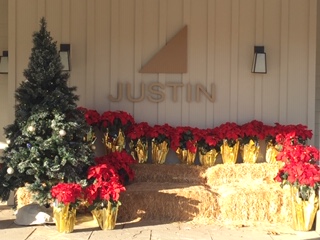 We checked in and were told to go up the road to the tasting room.

It was a room right next to the wine cave (we’re like Buttigieg, minus the donors, hahaha). 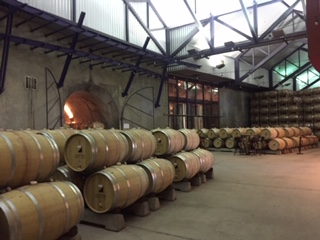 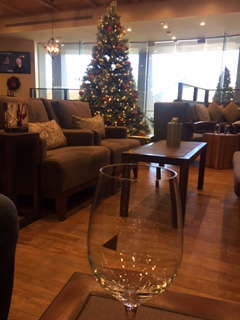 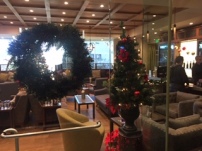 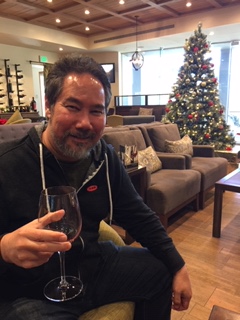 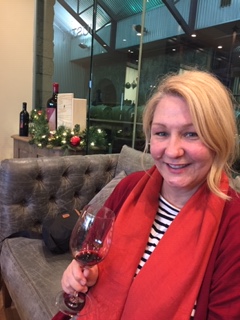 Our sommelier recognized our harried look since there was another couple there who had just come from LA and were headed to Sensorio that night too. He knew how to calm us down. The reserve Malbec was amazing! The pairings were so yummy. Shaka was in bliss and it was almost as if the journey had been a quick, easy jaunt. ALMOST.

Another group came in with the same look we had had. They were grumbling and complaining about the traffic snarl. But after 15 minutes later, their moods, like ours, had shifted.

After buying the Malbec and a few other items, we headed back to town to our hotel/motel (holiday inn – j/k). It was a quirky motel right in the middle of town. As we checked in, the front desk guy seemed to have his finger on the pulse of everything happening in PR (and all the discounts we could get at their affiliates). He suggested we head to Sensorio immediately, so we did!

We got in line right around dusk. It was gorgeous! And colllllld! 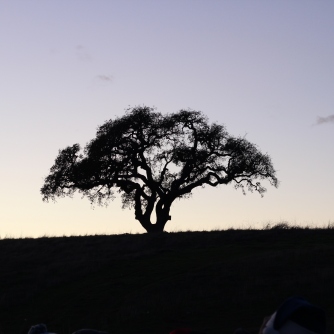 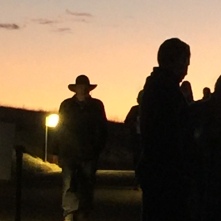 Since we didn’t have tickets yet, we were told to stand by this bench off to the side of the entrance.

We watched another line form that I assumed was the 6:00 pm group. But then the gate started letting in the 6:00 ticket holders (it was 5:45). So I asked another guy (since the guy who told us to stand by the bench was gone) and he said that the line I had noticed was for people who were waiting for tickets. UGH! I said, well, that’s us, but we have been standing by that bench for an hour. The guy says, well, you can just tell the people at the front of the line.

But this wasn’t LA. As we went to the back of the line, the guy emerges again and says that the people at the front of the line said we could be in front since they had seen us standing there this whole time. Weeeee! And a few minutes later, we were in!

It was so beautiful!

It was a surreal experience. Even with all those lights, you could still see the stars above so clearly, giving off the impression you are between galaxies or something astral like that.

After our interstellar hike, we went back to the hotel/motel and got in the hot tub. The looks from bundled-up guests checking in were amusing.  As warm as the hot tub was, the walk back to our room was chilly. But it was the perfect way to snuggle in to bed.

The next morning, we headed to town to have breakfast at Andrea’s on Pine. We got in without a reservation or being waitlisted, but 5 mins after we sat down, a crowd started gathering. The food was delicious! If you go, don’t pass on the homemade salsa. It’s to die for!

We asked our server for a local coffee place rec (that wasn’t Starbux) and he pointed us (literally pointed) across the park. I said, ” what’s the name of the coffee shop?”

I couldn’t help but chuckle. I mean, for good coffee, I WOULD wander across a park blindly, but I didn’t want to if I didn’t have to.

We did take a walk through the park, tho. 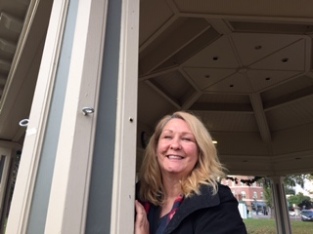 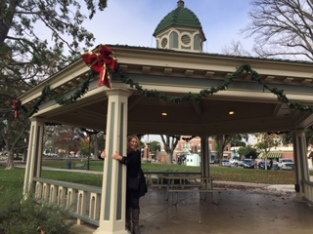 We passed a few coffee shops on our way, but we ended up at the recommended Spearhead, the line was long (this must be good). They even had oat milk, so I was happy! And the coffee was delicious! As we walked back to our car, we passed by the Brown Butter Cookies.

I am not really into shortbread cookies, but since I made some this holiday season and won 2nd place at work with my attempts at #thecookies (NYT Alison Roman’s salted butter chocolate chunk cookie), I guess my tastes are changing. We walked into the shop and they gave us a sample. Even though I was so full from breakfast, I had to try it. This cookie was unlike any other I had ever had. It was the salt. It was the sweet. It was amazing!

We bought a bag to give as a gift to Shaka’s sister.

Then we headed to River Oaks Hot Springs Spa. We rented an outdoor, private, mineral water hot tub for an hour which looked out over a vineyard. 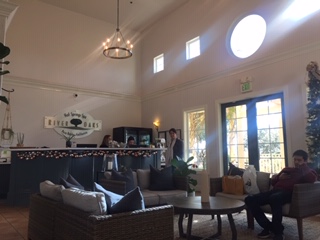 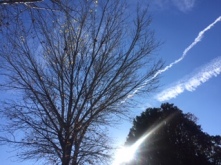 Sure, we smelled like farts the rest of the day, but this was a magical experience.

We left Paso Robles at 1:30 pm to make our way to Solvang.

I hadn’t been since I was a kid. I love aebleskivers (a family friend made them for us when I was younger) since they are also the same as the Dutch poffertjes breakfast treat.

Unfortunately, the traffic gods were still at it. Crash after crash added to our time. Every gas station restroom was crowded. I had a long chat at one of them with a woman visiting from Spain who had just come from Big Sur. Her husband was surprised when I waved to her as we drove away and wished her a great rest of the trip in Santa Barbara. Girls make friends in bathroom lines, is what I’m saying.

My dad had gone to boarding school in Los Olivos and asked us to drive through there. He thought it would maybe save us some time since it took us off the 101. It was beautiful (both the school and the town). But we had Danish town vibes to get to.

We arrived in Solvang at dusk. It was quaint and festive.

The traffic gods hadn’t been with us, but the parking gods were! We found a spot right away and ended up getting seated in the Solvang Restaurant 10 mins before they were no longer seating.

We got our AEBLESKIVERS!!!!

Traffic continued to snarl as we made our way towards Santa Barbara.

I don’t know if it was the traffic or all the things we did, but it felt like we had been gone for a week. I know that time between Christmas and New Year’s is especially confusing with regard to structure, and this mind warp didn’t help.

But you know what did?

Taking a trip with my hubs, meeting people and having fun experiences.

And wine.  And time the next day to sleep in. And then nap.

Happy new year, everyone! May 2020 bring you new adventures and opportunities!!! And if you have lots of traffic, hopefully the view is nice.